The Label, a possible source of information...

I had hoped to have more to say about this label, and the fiddle it was attached to.

I liked the neat handwriting.  It appears to me to read: Matthias Kofler, Salzburg 1910.

A little research on the internet, and I found, well, nothing of use.  Apparently there was a Kofler, or Kofler family, making violins in the mid- to late-1800s.  But I couldn't find any Kofler.  So I don't know.  It could be a completely fake label.

The violin itself appeared to be a decent, upper-middle-class violin.  I had it on the bench at the Wallowa Fiddle Tunes Camp last month.  Some glueing and a new bridge.  Grabbed a couple snapshots. 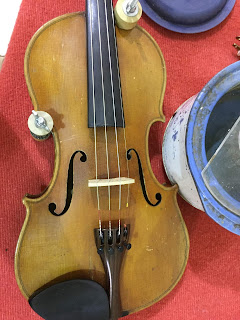 The body, with a couple clamps, next to my fancy gluepot.

The scroll was tidy, though with a couple pegbox breaks that had been previously repaired. 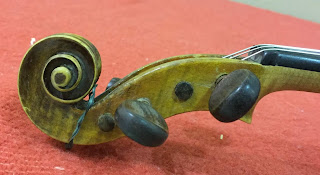 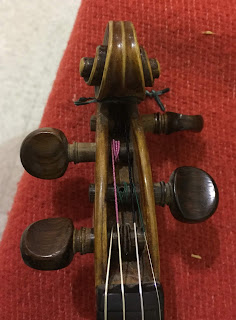 It had been a wallhanger for a few years, the cord around the scroll's neck was part of its hanging.  Now, with a new bridge, new tailpiece, and new strings, it's being played again.  From what I've heard from the owner, she's happy with it.

But I still don't know who Matthias Kofler was.