Had a customer bow in for a rehair, a nice looking stick.  I didn't recognize the name, so did a little searching first. 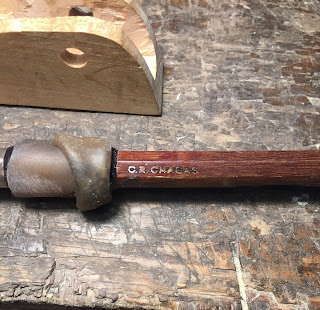 Turns out it's one of Arcos Brasil's trade names, a factory-made bow.  Nothing wrong with that.  Most of us have factory-made bows and fiddles, use them and enjoy them.  The point is: this in not a handmade bow.

This bow has not been rehaired, as far as I can tell, so this is the way it left the factory.  I'll add also that it has been played for some time, and the musician has enjoyed using this bow.  No one is perfect, no factory is perfect, and what works, works.  Just some interesting details, I hope.

So, when removing the hair from the tip, I had a little trouble removing the block.  It was somewhat glued in.  Here's the hair after I got it out. 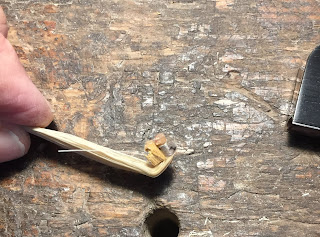 Superglue was used to bind the hair in the knot.  Again, nothing wrong with that.  I do it, as do many other rehair folks.  It seems better and simpler than the old burn-with-rosin way of binding the hair, though plenty of folks do that, too.  Seldom in a factory these days, I'd say.  I suspect the block was not intentionally glued in, but that the plug was seated before the glue on the hair had a chance to dry -- a sign of haste.

Here's the tip mortise from 'above'. 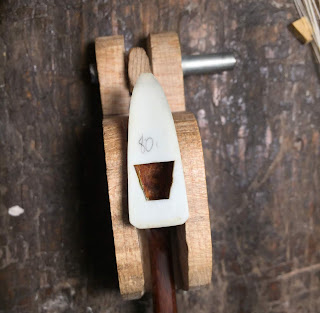 Note the slight 'divot' on the right-hand side.  Extra credit if you can see it's partner on the left-hand side.  What are these?  We call them 'mistakes' in the trade.  The router that was used to hog out wood here went too far.

Here it is at an oblique angle. 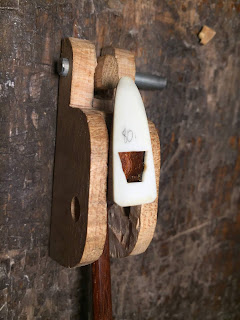 And a little more angle. 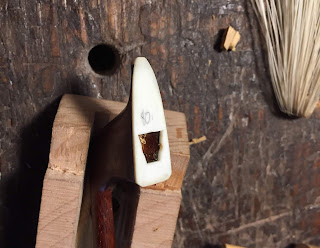 You might be able to see the round router marks in these photos.  May have to enlarge them a bit by clicking on them.  The round cut-out gets bigger as one looks further down into the hole.  That's because the mortise has angled walls.  The bottom of the mortise is smaller than the top.  It's not a badly cut mortise, and the errors on the side don't cause much problem.  In cutting a new block, we fit it 'front' and 'back.  Doesn't need to fit air-tight on the sides.  In fact, it's a little easier to get out on the next rehair if it doesn't fit the sides too tightly -- assuming one doesn't then superglue it into place.

In the frog, we can again see some sign of haste.  Here the block is a little too loose on the side. 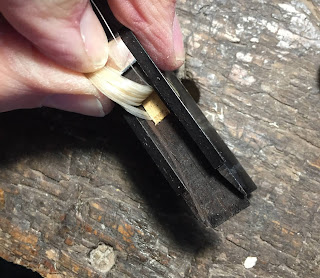 A section of hair has slipped around.  From this, I can deduce the bow was probably rehaired 'frog-first' and this slippage was accounted for when combing out the hair and tying it at the tip.  The hair itself, the playing section of the hair, was in fairly decent shape as far as tension was concerned.

Now with the plug removed -- 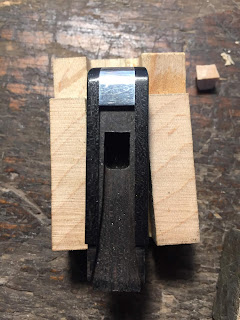 Note the rounded corners at the bottom of the mortise, again a sign of router work that was not cleaned up with a chisel.  This is not ideal, but I left it as is, cutting the corners of my new block to fit that.

The bow is now rehaired, and should work fine.  Just a glimpse behind the curtain.

Posted by Ken Pollard at 9:17 AM No comments: