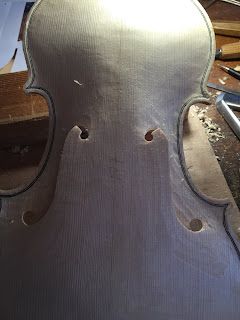 Following Salve Håkedal's on-line tutorial, I am tryng to carve Hardanger f-holes.  He has placed a fair number of nice photos there, but even so, I am having a hard time understanding some details of the geometry.  So the carving is painfully slow.  Cut a bit away.  Look at it.  Look at Salve's photos.  Turn the top around.  Look again.  Cut a little more away.  Curse under my breath.  Look.  Cut.  And so on.

The overlapping stems make it tough to carve.  Slice a bit away with a knife.  I have a bent knife which is actually fairly useful in some of the tight spots.  I may still have too much overlap; perhaps the under portion is still too far inwards.  That, however, can be remedied later, whereas if I cut too much away too soon, very hard to put back together. 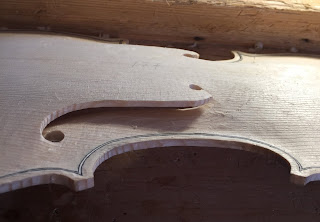 Of course I'm doing this because I'm interested in the music.  One thing I recently discovered, much to my surprise, is that the Norwegian state/public broadcasting, NRK, has an iPhone app where I can stream the Norwegian stations.  They seem to have a very nice folk music station.  Check it out. 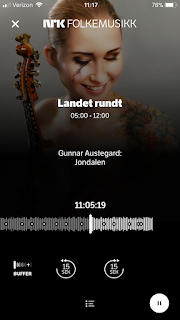 Posted by Ken Pollard at 1:46 PM No comments: 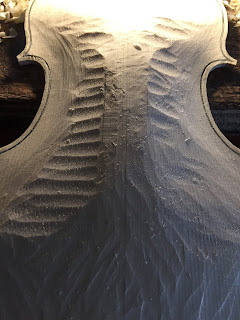 Purfling installed on 4 plates (2 fronts, 2 backs) and now working down the arching.  Here is a spruce viola top.  Parallel gouge marks from the rough arching.  Smaller (aka smoother) tool marks around the purfling now, smoothing out the perimeter.  Starting to take the gouge marks along the spine out with finger planes. Then onto scrapers.  Then onto horsetail.  Smaller shavings with each successive tool.
Posted by Ken Pollard at 1:29 PM No comments: