"Having lost all sense of direction, we were able to double our speed." 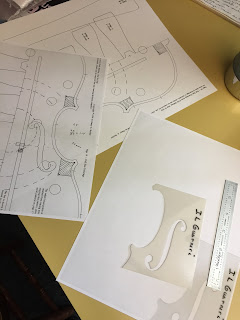 My first totally handmade viola, I've been wanting to make one for some time.  Never could settle on an outline.  Made a form for a Stradivari viola in 2005.  Even got ribs on it.  Then unhappy with the corners.  It languished.

I like the Brescian violas.  Primitive in a classy way, often with a deep, dark sound.  So, made another form based on a Strad magazine poster.  Got ribs on it, birds-eye maple, which rippled and warped so badly I took them off and threw them in the fireplace.

This year, decided to just follow the pattern in Strobel's book "Viola Making."  It's smaller than I wanted, but there were details to follow.  And I've learned it's better to just make the darn thing, see how it turns out, make the next one better, based on what one learns from the previous.  Besides, the resulting first instrument isn't as bad, or as good, as one feared or hoped.  That's life.  Who the heck do you think you are, anyway?  Some sort of genius?  Well, you're not.  Get back to work.

Strobel's pattern had fine f-holes.  But I didn't want them.  I wanted some del Gesu type f-holes.  Guarneri del Gesu didn't make violas.  I do have a workable pattern for a violin f-hole, so scaled it up to viola size.  Dreams of using the computer to do this quickly didn't pan out, so I sat down with paper, pencil, eraser, straight edges, French curve, protractor.  Eraser, did I mention eraser?  My eraser got a good workout, but I finally came up with something that I thought looked reasonable to me, and the correct size.  I think.  Onward!

So, to lay it out on the viola top, and then start plunging holes in. 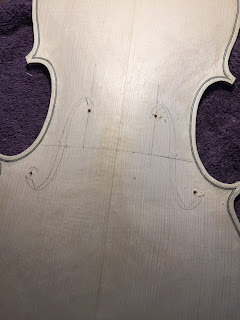 With the pilot holes in place, cut the terminal holes, then start sawing out.  I stayed well within the lines, as I have mistakenly pushed this top too far along before cutting the f-holes.  It's near final graduations and quite thin for this sort of work. 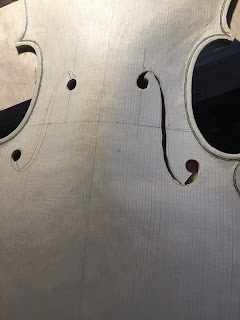 With the stems sawed, time to resort to the knife.  This is it for the day.  Nearly there.  Will look at it again tomorrow with fresh eyes. 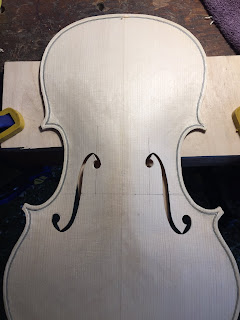 Posted by Ken Pollard at 2:23 PM No comments: