Your Crack is Showing


Had a fellow in the shop yesterday, and we got talking about antiquing.  Many musicians want old instruments, and if they can't find an old instrument they get along with, they want a new one that looks old.  Something about 'the stories it could tell' or that.  And I suffer from it as well.  I like looking at old, well-used instruments.

I, however, have enough trouble getting a clean, new finish on my fiddles, let alone messing it up convincingly, so I gave up on antiquing some time back.  But the conversation yesterday got me thinking.  I'm in the process of varnishing two relatively modest Chinese whites -- instruments made elsewhere that I take apart, clean up a bit, then varnish and set-up.  It tickled me this morning to think about 'gunking' one up a little bit, to see how it would compare to the 'un-gunked' one when they were both done.

To gunk up a  fiddle, I mix some Ivory Black oil paint with a little mineral spirits, smear it all over the fiddle, then wipe it off.  Some of the black remains in the seams, nicks and what-not on the fiddle.  All that taking it back off takes time, because I really hate seeing a glob of paint somewhere that I've missed.  A glob of paint randomly located on the fiddle doesn't look particularly old, just careless.  And all this antiquing does nothing whatsoever for the sound of the instrument.  One hopes it improves the look of the fiddle in someone's eyes.  In addition to liking the sound and playability, we want to like the way it looks.

In the process of gunking-up my fiddle, I had the even worse idea of adding a fake crack.  Haven't done this before, though I have seen it done on other fiddles.  Soundpost crack?  No, too much right now.  So I made a fake crack at the A-peg hole on the treble side.  A common crack, and when real, somewhat bothersome to repair.  It can devalue an instrument, even convince someone not to buy the fiddle.  So why do it?  Well, to see if I could.

I think it turned out ok. 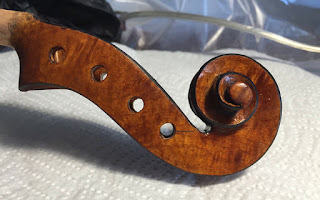 It actually bothers me, as a repair person, to look at it, even though I know it is fake. I'll take that as a good sign.  It also cautions me to examine such cracks a little closer in the future.

As a reference, if you are a violin-repairer reading this in the distant future, and the label is intact, this is VN140.