We traveled last weekend up to La Grande, Oregon, for the SpringAlive 2014 workshop.  We've been several times in the past, and in the recent years have just really learned a lot from this event.  It is a contradance workshop, covering both dance and music.  I was involved in both parts -- fiddling and dancing -- so really didn't get any photos from the event itself.  Others did, and I will write more on the workshop itself soon, hopefully also including a few photos.

But I thought I'd add here a few photos of the trip up.  Monica drove, so I  had the luxury of just watching the scenery, scenery I've seen so many times, so familiar to me, and yet seldom with the opportunity to actually look at it.

I decided to take a few photos with my phone. Not great quality, but maybe of some interest.

The first one here is at La Grande, Oregon, just across the border at the Snake River.  I drive this way when going up to Weiser for the National Old-time Fiddlers Contest, and there is a little stretch of tributary river, right next to the freeway, which is so nicely wooded and tranquil that I always like seeing it.  Unfortunately, the viewpoint is at the top of a freeway bridge with no place to stop.  I tried to get 'the' shot, but failed.  I did get a decent one of the nearby railroad bridge. 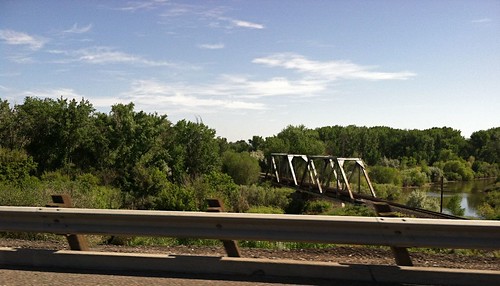 As a side-note, for those who eat such stuff, many of the country's Tater Tots are made at the little factory on the reverse side of the freeway.  It's not so scenic, although it is fairly easy to spot a little steam 'smoke ring' coming out of one of the stacks.

Farewell Bend is the place where, in the old days, The Oregon Trail left the Snake River after following it for a few hundred miles.  Following the Snake River downstream takes you through Hells Canyon, which, as the name suggests, isn't exactly wagon country.  Nor freeway.  It follows the Oregon Trail crossland here.

This shot is looking downstream towards Farewell Bend, though it's just out of sight on the left.  Idaho is across the river. 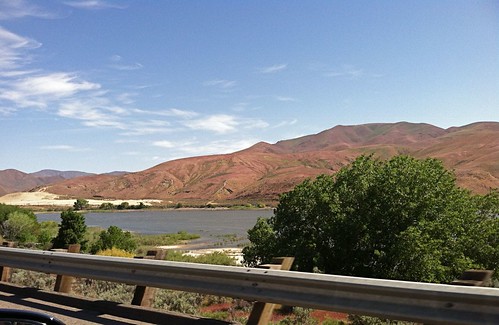 And here's a shot that catches Farewell Bend on the right, and the entrance to Hells Canyon as the Snake veers downsteam towards the right of center. 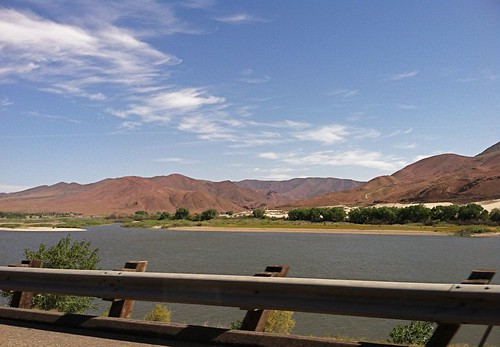 As the Oregon Trail (aka I-84) continues cross country, we follow the Burnt River.  This time of year, things are fairly green.  When the Oregon pioneers came through, it would have been late summer, and fairly dry. 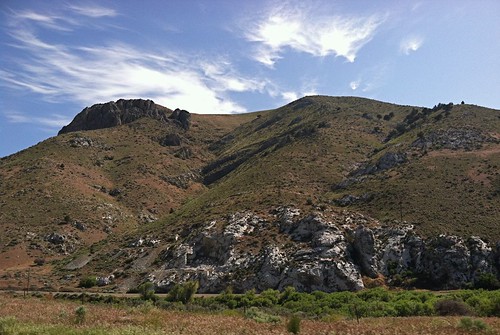 At the conveniently named Lime, Oregon, is an abandoned cement plant. 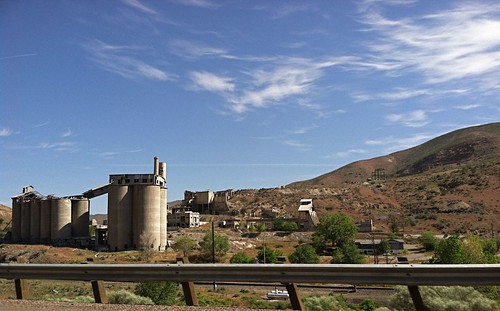 It's fairly interesting to look at, to my mind. 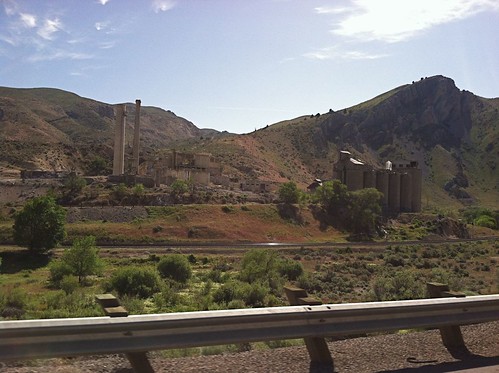 Between Baker City and Ontario, we pass a landmark that reminds us to be on good behavior because it's easier for Santa to see us now. 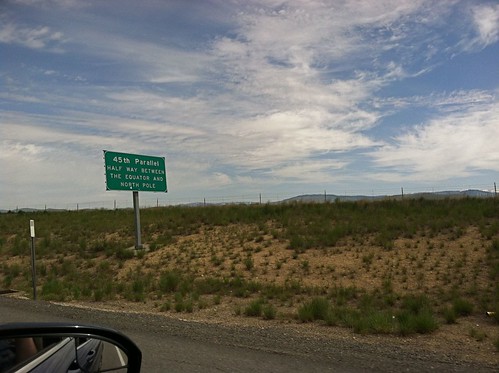 It's hard to tell in the photos here, but the Arrowleaf Balsamroot were in bloom.  Yellow flowers, smell of vanilla. 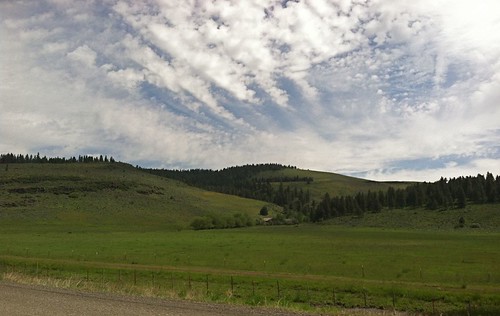 Ladd Canyon is a relatively steep but short canyon the descends down to La Grande.  In the winter time, it can be quite treacherous, and is sometimes closed.  I spent a few days in La Grande one December, stuck between the closed freeway in Ladd Canyon on one side, the Blue Mountains on the other.

Here we are just about to descend into the Canyon. 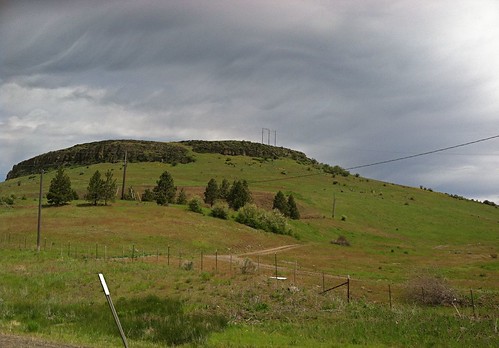 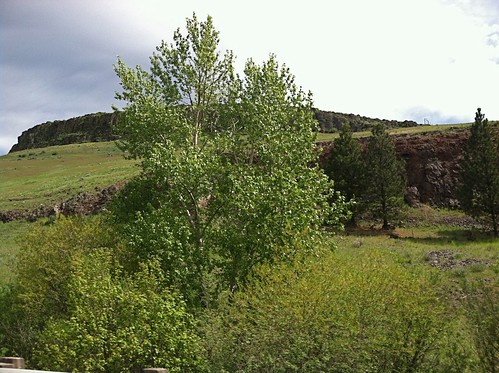 So then we got to La Grande, secured our hotel room, and headed off to the workshop.  A musicians workshop taught by Susan Songer  and Lanny Martin of Portland, a dance workshop taught by David Kaynor of Massachusetts.  Lots of good info.  A potluck dinner, then the dance, where all the musicians got to play in the band.

Sunday morning I had an hour-long private fiddle lesson with David Kaynor.  As I mentioned, I write more about the event itself in a following blog post.  I will mention that it is a worthwhile event.

We headed on home, and once safely on the other side of the 45th Parallel, out of Santa's view, we had a beer with lunch at the Bull Ridge Brewery in Baker City, Oregon. 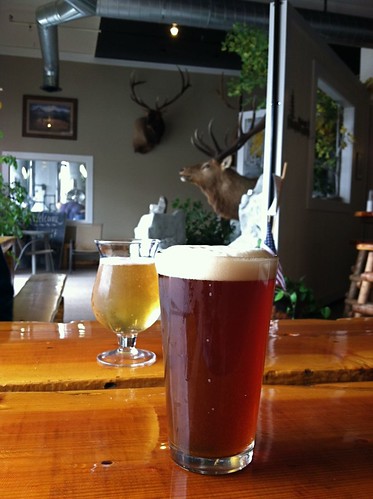 The "Bull" of Bull Ridge being bull elk.  Lone Pine Lager in the rear, Sugarloaf IPA in the foreground.
Posted by Ken Pollard at 4:00 PM No comments:

We got off for a quick weekend to the Portland area to see the goings on at the Northwest Handmade Musical Instrument Exhibit.  It was a worthwhile trip.

The Exhibit is set-up in a Marylhurst University building in Lake Oswego, Oregon (just south of Portland).

The place was hopping with exhibitors and folks interested in seeing new and different instruments.  Lots of talking, lots of playing.

One of the makers I wanted to meet in person was Chet Bishop. 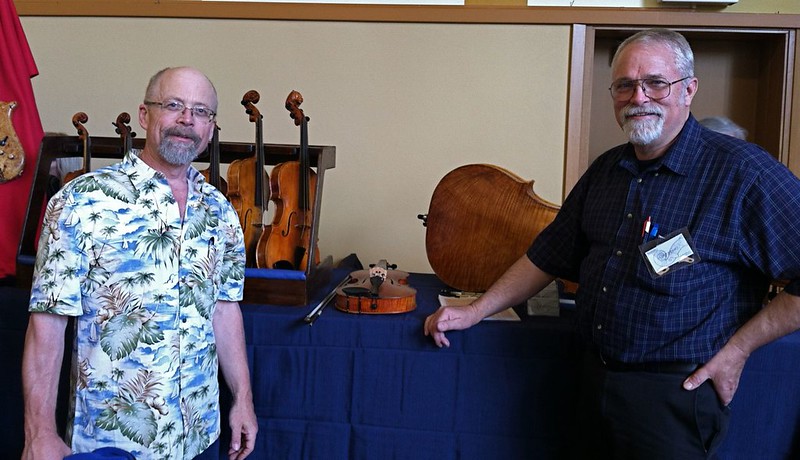 Myself (left) and Chet Bishop (right). Chet and I have 'spoken' to each other via e-mail and forums for years, but have never met in person before. I got to play all his violins and violas here, and nicely done they were. We had a good discussion of arching and wood types, and a general whining about varnish woes.


Being mostly interested in violins, I spent most of my time talking to the 10% of the exhibitors who were violinmakers. 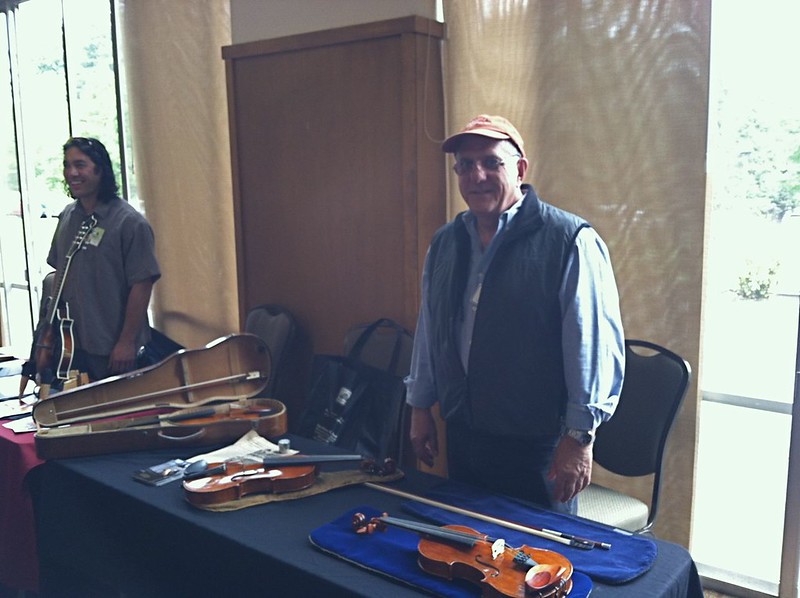 I took a week-long violin set-up course from Paul Schuback in 2007 at the College of the Redwoods (Eureka, California).  We had a nice chat, and he gave a very useful critique of one of my violins.  It's that sort of information that is so useful to makers, and one of the things that makes these sort of events so useful. 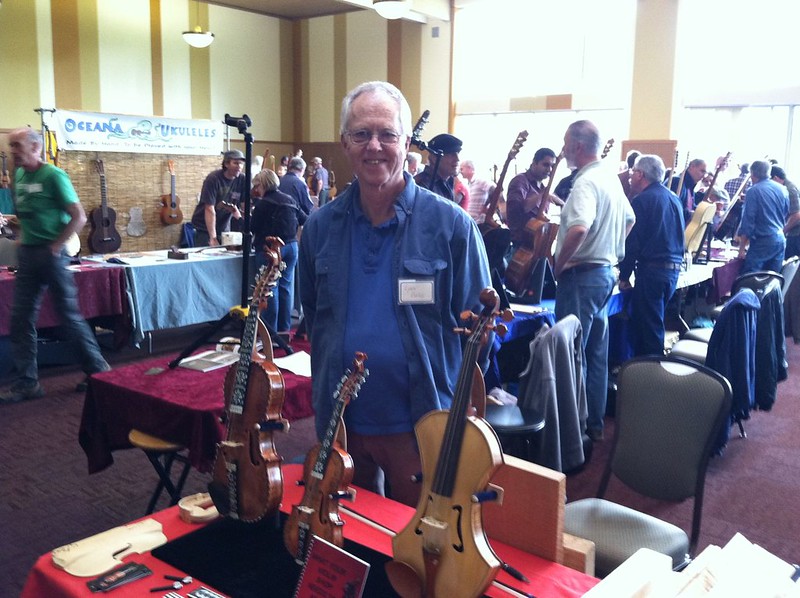 And, some of you may have notice in the background -- ukuleles! 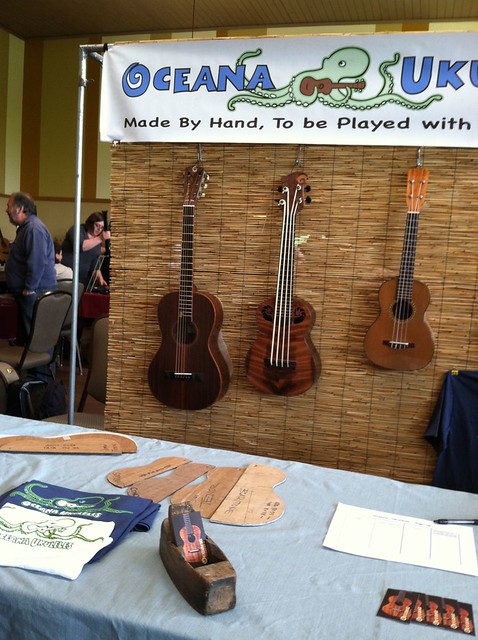 Near Chet Bishop's display was Kerr Violins (Portland).  I spoke with Mr. Overstreet (?) here (I'm terrible with names and forgot to write it down). 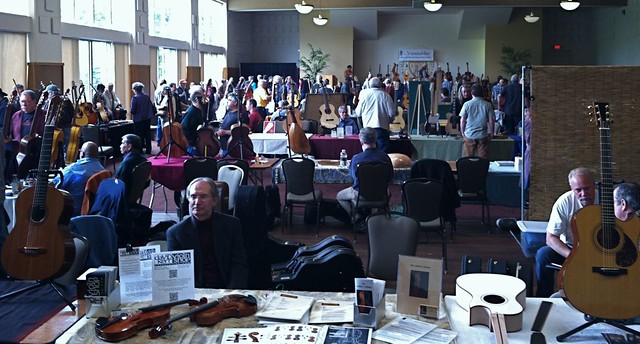 Andy Emert, who also works at Kerr, was elsewhere this day.  Andy is a champion fiddler and is always stops in at our shop during the Weiser contest.

A few other scenes from the event as I saw it. 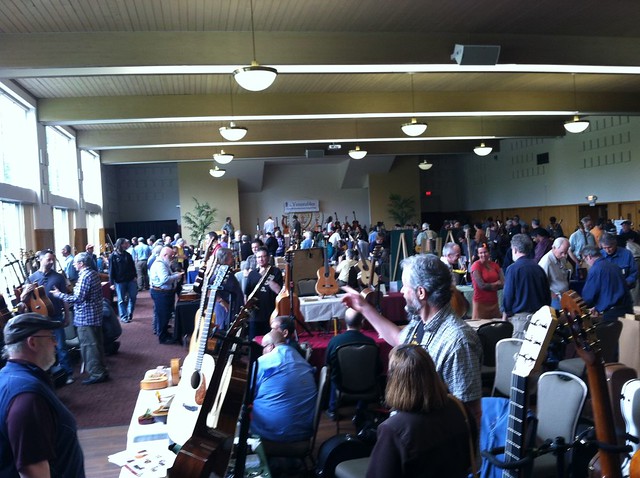 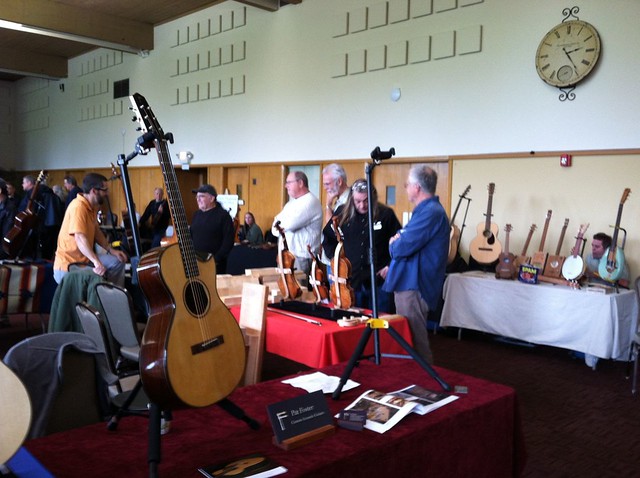 For more photos, taken by Chet Bishop, before the doors were open, you can go to his Fiddle Hangout post.