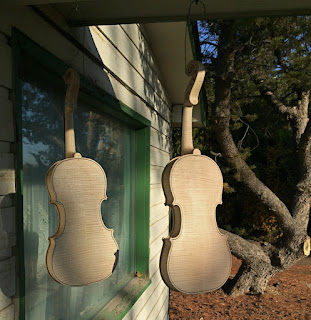 Buffed up and, for now, done with woodwork, my two newest are hanging in the sun. An old method of enhancing the grain, it is slow, yet does a good job, retaining what we like to see in fiddle wood.  A heavy stain would lock the flames in place.  This way, if all goes well, the flame will dance as one moves it in the light.

Of course, after one day, I'm already seeing a few scraper marks in the backs that I wish I had seen before.  Will see how they behave in the next day or two.  May just leave well-enough alone, as they say.

Jan has been playing fiddle with our band, the Acrasians, for a bit over a year now.  Her family has been in Idaho for a few generations, and it seems she knows someone every where we go.  She got to know an older fiddler in the area here who was playing back in the early 20th century.

HI Jan & Family, Recd. your great letter today and was very
glad to get it and am hoping that some week end or for that
matter come any time I’m here in place most of the time, having
no legs am somewhat handicapped, so not too hard to locate.

Now about my first fiddle, I made it out of a cigar box believe
it or not, we had a German neighbor next door who was an excellent
violinist, played classical music as well as any, he gave me
a few lessons, mostly just how to hold the fiddle, no, he called
it a violin, he was a violinist, I’m only a fiddler, I had two
brothers that was fiddlers both older and gone from home when
I started, my dad also played when he was a kid, and his dad
my granddad was I guess better than the rest of us.

I guess it must have been around 1910 or 1911  I was doing the
janitor work at the two room school house in a little town
called Leland, in Nez Pearce County Idaho, I got four dollars a
month, those days Montgomery Ward sent out their catalogs they
had fiddles advertised in them, I had saved my money until I
had seven dollars and enough more to pay the shipping charges
so I ordered one, Mother told me I should have told them and
they would have put more with it and got a better one, any way
as soon as I learned to tune it I could play after a fashion.

In the summer on a big wheat ranch I did chores and there was a
young girl that could second on Pi-ano and we had some wond-
erful times, and at the dances after I was a little bigger I
would play for the dances when the regular musicians went to
the midnight suppers, yes those days we dance all night some
times until daylight.

I worked on ranches a lot when I was a kid and we lived in a little
town and Dad always had some horses around, and after I grew up
I broke horses for a horse outfit that were sold to the army.

You ask where I went to learn my first tunes, I knew a lot of tunes
we learned to sing in school, those tunes and anything I could
whistle I could play on the fiddle, and at a dance I might learn
one or two new tunes, and I went to a lot of dances.

Ame here most of the time except when I go for a foot or leg
measurement, will be gone Monday P.M.


And a second note, on green paper --

Friend Jan, I am now in the Valley Plaza Retirement Center
1615 8th St. Nampa, and I have my violin with me, why dont you an
and the kids run over and try my fiddle, no it’s a violin.

Came from Spain, I’ve had it 73 years, come try it.  I cant hear
but had another man tune it and I played some, bring your
husband if he would like to come

Best regards, as ever Ike Crosby. 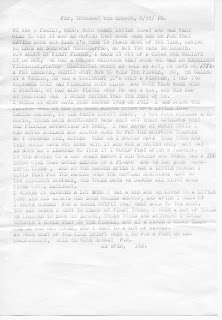 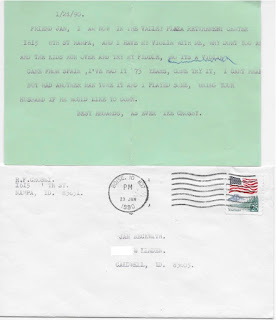 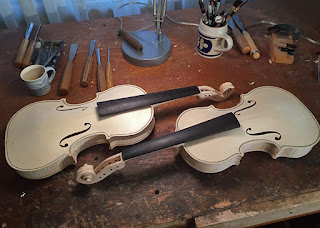 My two most recent, all together.  Plenty of detail work left before moving onto the varnishing, but I can now heft them to my shoulder and they feel like fiddles.  That's fun.

Posted by Ken Pollard at 1:43 PM No comments:

... with a crew of horned-helmet warriors. 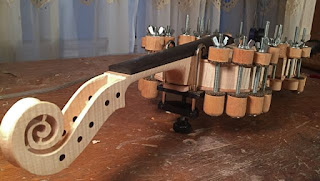 Posted by Ken Pollard at 4:05 PM No comments:

A Freed Rib, or Six 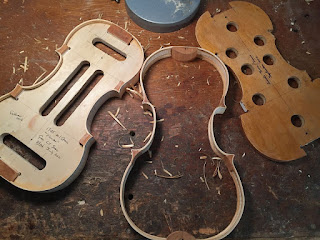 The plates, top and back, are done to the point that they can be glued onto the ribs.  So this means the ribs have to come off the forms.  I have linings both top and bottom, the first step for removal is to trim these from square to tapered.  All sorts of ways to do that.  What you basically want is a big surface at the outside, to create a bigger gluing surface, tapered down to thin on the inside, to reduce weight and stiffness.

I take a compass and set the pencil at about half the width of the lining, in the vertical sense, and trace out a line on the linings all the way around, top and bottom.  Then a sharp knife, cut a bevel from the line to the inside edge, tapering down to meet the rib.  I usually make a few nicks on the form and on the ribs, but nothing so much to worry about.  And it doesn’t need to be perfect right here, because I’ll clean it up later after the ribs are off the form.

Once the linings are trimmed, I use a small hammer and knock the blocks loose from the form.  Then a flat chisel, I strike diagonal cuts to take out the ‘inside’ corners that will disappear anyway.

When those fragments are out, it’s a matter of carefully loosening the ribs -- may have a few accidental glue spots that you don’t want to rush loose -- and then bending the ribs outward a bit, tipping the form as you go.  I start at the C-bouts and work towards the larger, lower bouts.  Once the endblock is free, you’re pretty much done with the removal.

Then, trim up the blocks and clean up the linings a bit.

Next, glue on a plate or two.