This is the third major redesign of my shop's web-page, and it is the first one that I have been mainly hands-off in the actual coding.  My son, Roger, took care of that part this time.

You can see the new web-page here.

It should look something like this on a computer screen. 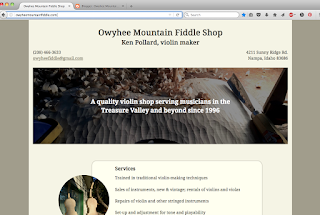 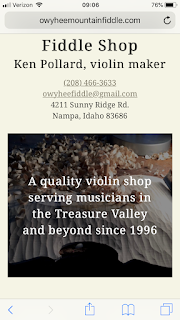 My previous web-site looked exactly the same on a smart phone as it did on a computer screen, only smaller. This one is scalable, so that it should fit, should adjust, to various screen sizes.

And that's just part of the reason I've decided to take a more hands-off approach to maintaining my web-site.  When I first learned computer coding, we were taught Fortran.  Our screens were dark green with bright green letters, and they were terminals, not individual computers.  Terminals hooked to a big computer in a different building, and as students we had the lowest priority, which meant it took a long time to type something in.  Then personal computers came out, such as my first, a Commodore 64, and I learned Basic.  Then Pascal as I got into grad school.  Then C.  A brief dabbling in Object-Oriented programming.  Then I graduated and got to working on fiddles.  I have no idea what's going on in programming today, and I don't care to learn.  I want to spend my time on fiddles.  And music.  And reading.  Cat videos.  Nearly anything else, except yard work.

The other idea I had was to be minimal on my shop's web page.  It's something I've been thinking about for some time now.  In previous incarnations of my shop's web page, I had multiple pages, stacked with what I thought of as useful information.  The problem is, as time has gone on, fewer and fewer folks read much of it.  They wanted contact information, to contact me, and then ask me exactly what they wanted to know rather than searching in hope that it might be somewhere on my web-page.  And it probably wasn't, truthfully.

So the new web-page in really basically a high-tech business card.  Roger and I designed it as single page.  I do have links to this blog and to the shop's Facebook page.  That's where I'll add recent information, which will be highly relevant for a brief period of time, then can fade into the memory bank of some computer somewhere and folks won't have to wade through it to find out what my hours are.  (By appointment, as with most single-person violin shops.)

If you want to see Roger's web-site, it's at atalkingfish.com.

As with all things like this, my new web-site is an experiment. Even if it works, something different will replace it before too many years have gone by.