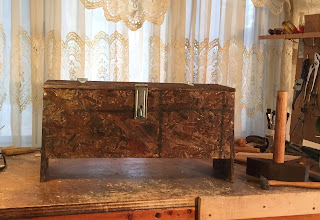 I've been wanting to make a basic medium-sized tool chest for the shop. Unrelated, in the past couple of years, we've had to do a bit of remodeling, or repair, that required a few sheets of sheetrock.  The sheetrock delivery included a nearly half-inch thick, 4'x8' sheet of chipboard, of the roughest kind.  Being frugal, I put it aside, thinking I might find some use for it somewhere.

Holidays are a disruption to ones normal schedule, and a chance to do something different.

So, these things combined.  I found a few line drawings of Viking sea chests, and settled on a few folks' idea of one found on the Oseberg ship.  I modified the information I found a little, and a little more as construction continued.  I used the chipboard, nasty stuff, and roofing nails to supply the decorative nailing, as the thing was clamped & glued together with Elmers carpenter glue.  I had a small, opened can of Minwax laying about, so used it to stain the chipboard, the color being Provincial 211.  In another day, I'll through a layer or two of blonde shellac over it, to give it a little more protection, the shellac being stuff that is otherwise going to go bad before I can use it up.

The only thing I had to buy was the hardware, and I went over to our local D&B feed store, found some fence/shed hardware, 2 strap hinges and a clasp, the least expensive I could find.  I think the total there, with 6% sales tax, was just under $18.

I'll account my time to Holiday entertainment.  And we have our annual Viking party coming up, so someone might find it a handy place to sit, maybe grab onto an oar.

And yes, this is ridiculous, but that's part of the fun.  It will function as a tool-storage box, at the least.
Posted by Ken Pollard at 10:49 AM