Not a Good Businessman

I really don't like the cheap Chinese fiddles being sold these days.  A heads-up: if you are thinking of buying a violin, bow, and case on-line for $100, just buy beer and pizza instead.  You'll be better off.

I have found one place, however, where inexpensive instruments, not bottom-of-the-bucket VSOs, are useful, and that is in the fractional violins that go out on rentals.  Even then, I don't just pull them out of the box and send them on their way.  Typically, new (real) violin strings, work over the pegs, adjust or replace the bridge.  Throw the bow away, substitute in a Glasser or something similar that has a chance of surviving.

And my rentals are rent-to-own, so I move the kids up through various sizes as they grow.  If the kids stick with it, the parents are well into paying for a decent full-size fiddle by the time the child has grown to that size, and has learned, through various mistakes, how to take care of a fiddle.

The other day, this poor 1/4-size violin came in, brand new, from a reputable supplier.  The fingerboard was a ski-jump.  I debated sending it back, but didn't want that hassle.  I debated asking the supplier for a new fingerboard.  That just seemed too demeaning to all of us.  So I decided to waste more time. 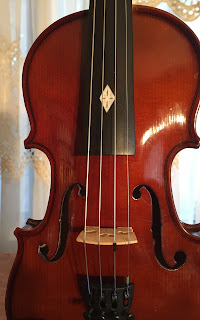 After all my reading and work with Hardanger fiddle design, I started to get a little interested in the inlay process, something I haven't done much of.  So I found a piece of bone, a cut-off from a guitar-nut blank, cut it quickly to a rough diamond shape, laid it out on the center of the fingerboard in a random spot, and started the inlay.

I didn't notice at the time, but I drifted a bit to one side during the inlay process, something to be on the look-out for if I do more of these things.

I also did a little bit of simple engraving, which is a bit crude, but I think it looks better than just the bone diamond.

Also cut a new bridge, installed new Prelude strings and a Wittner tailpiece.  For a cheap little fiddle, it ought to work well for someone.

On a sad note, my long-time friend, Stephen Shepherd, passed away yesterday.  He had suffered a stroke a few years back, and went from being a vital historic cabinetmaker and author to a semi-paralyzed invalid.  Early on, it looked like he might come out of it.  He didn't.  When I visited him in Salt Lake this past Thanksgiving, he was basically bedridden and bored, starving himself to death.

I will miss him.

Here we are, the Three Musketeers, at Fort Bridger, Wyoming, in 1974.  Stephen is center, I am to the left, and George Stapleford to the right. 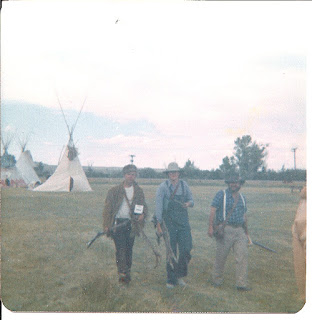