Every once in a while, I actually finish an instrument, or two. 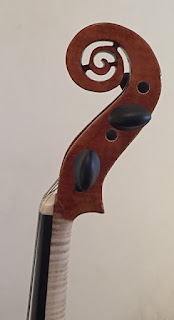 This has been a real-live 5-string fiddle for about two weeks now.  Played the contra dance in Boise with it the Saturday before last.  Also played it last Saturday, sitting in with the Serenata Orchestra in Boise, for their sing-along/play-along Handel's 'Messiah'.

Scroll is based on the stern-piece of the Oseberg Viking Ship. Here's an earlier shot, during the varnishing. 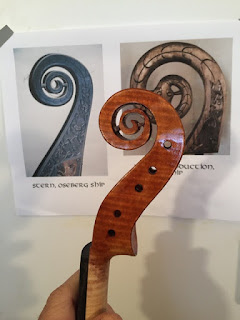 As we say when we're being vocally emotional: I am not completely unhappy with it.

The body form is based on the Brothers Amati that I drew several years back, following Francois Denis' method, and the f-holes are del Gesu inspired.

My most recent, being a violin for about a week now, is based on a del Gesu, the 'Plowden'.   The form comes from my tracing of a CT scan from the poster put out by Strad Magazine a few years back.

Also del Gesu inspired f-holes, which I like so am using them wherever I want to.

I'm not completely unhappy with this one, either.  Both are still stretching and growing.  Kinda fun to play them each day, note the changes.

I also just shipped off a fiddle, constucted here, that is a Christmas present, so I won't spill the beans yet.

And an eastern European white viola that I had been varnishing and set-up went out the door to a very happy customer.  She actually got it before it was really ready, having had a bad accident with her then-current viola, and needed an instrument for a few holiday concerts.  But she liked it enough as-was to buy it.  Just did the final intial adjustments this week, after the concerts.