I usually have a couple of fairly abused violins about, and from time-to-time, I will pull one or two off the back shelf and try to get some work done on them.  This is one.  I have dismantled it to get at what needs getting at. 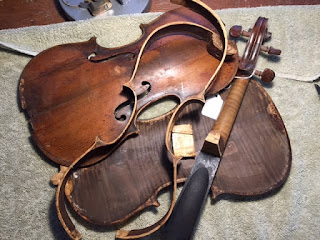 It is possibly a 100-year-old fiddle with a label that reads:

The label is another attempt at antiquing, I am fairly certain.  If one were to bet where this came from, a good bet would be "not from 1756 Paris."

This fiddle has been badly cracked, several times, and badly repaired in the past, with way too much glue being used.  Some folks working on violins believe more glue will make up for missing wood or bad joints.  These cretins will spend time in purgatory for implementing this belief.  Most of my effort has been removing old glue, just to get down to wood.

The inside of the violin has been darkly stained to simulate age.  You can see the white areas where the stain didn't get to, those areas under the blocks or ribs, for example. 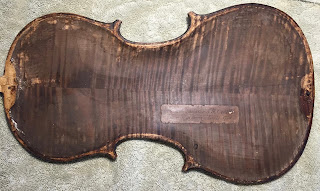 One bit of antiquing I just noticed is factory-applied thumb-nail damage, along the treble side of the fingerboard. 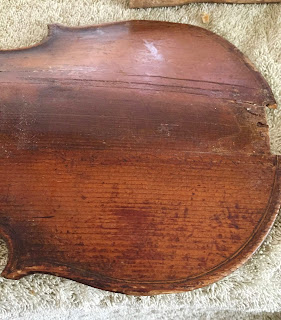 Maybe you can't pull it out of that photo, what with all the real antiquing that has taken place over the years prior. 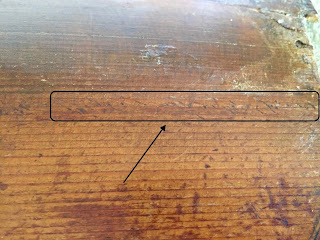 It's under the varnish, or at least part of the varnish, in some mid-layer.  Some one took something sharp and small, such as a knife tip or maybe a nail, and poked and scratched along there, then rubbed black stuff into it, to make it appear as if this particular fiddle had been heavily played by a virtuoso, maybe someone like Paganini, as one would with a high-quality old violin.

Be careful when buying with your eyes.