A non-fiddle-making post, but you have to eat, too. 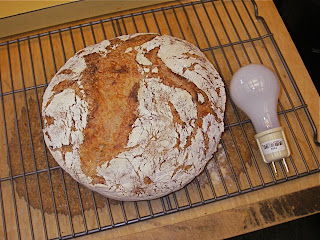 I use a long rise in my bread making, 24 hours or so.  One problem I’ve had is finding a place that is consistently warm over that time period.  We turn the heat off at night, and in the winter, it can be 60 degrees F or lower in the kitchen by morning.

Some folks have suggested a warming box -- a box dedicated to keeping the rising dough warm.  Simple enough thing.  Basically a box and a heat source, such as an incandescent bulb.  But I really don’t like kitchen gadgets, those bulky things that are dedicated to a single use, a non-every-day use.  Not a solution I’d like.

I’ve also heard of folks using their oven for a warming box.  Oven not on, but the light is.  The idea being the light provides enough heat.  I’ve tried that, and my oven light is not warm enough.

So I decided to buy a light socket, one of those ceramic or plastic fixtures folks use in their utility rooms.  Wire a cord on it, with a plug.  Attach the base to a short section of 2x4, and I have something I could put in the oven, running the cord out (door closed) and plugged in.  I’d have to store the socket-and-board somewhere, but it’s much smaller than a box.

When I got to the hardware store, I found the little socket shown in the photo.  About $2.  Exactly what I wanted, but didn't know it existed.  A 40W bulb and an extension cord complete the concept.  Used it last night, and it’s just right.  And when I’m done with it, it goes back into a drawer.

My go-to bread recipe is the no-knead version from Jim Lahey's book. You can find a recipe on the New York Times site.