One of the benefits of the pandemic, closed borders, and such is the proliferation of on-line workshops.  I've attended many.  And, for example, tonight I will begin my time with the Heart of Valley of the Moon, a workshop of Alasdair Fraser's with many other instructors.  I've long wanted to attend, but time, money, and a limited attendance have not been in my favor.  Now I can join in, from home, at a modest cost.

Another workshop I have long wanted to attend is the annual Hardanger Fiddle Association of America workshop.  Time, money, etc.  But this year I did.  And got to sit in on a luthier's workshop as well.

In that, I got to ask questions of bridge design.  I have an idea of what to do when shaping a normal violin bridge, but the Hardanger is a different beast.  For one thing, the understrings ride across a saddle/nut in the middle of the bridge.

When I built my Hardanger, I used a blank from Howard Core.  The luthiers at the HFAA convention didn't think much of those blanks, but it is a place to start.

I had seen a few Hardangers in the past couple months, just chance meetings here at my shop, and by then I was interested in seeing their bridges.  Significantly bigger cutouts than I had in mine, which makes sense.  With a blank, you start with under-sized cutouts and enlarge them.

So, with some ideas, and a little time this morning to work on it.  The understrings are a pain to undo and then thread through again, but it's not that bad if you're careful.

I don't have a good before photo, but here's an idea of what it looked like. 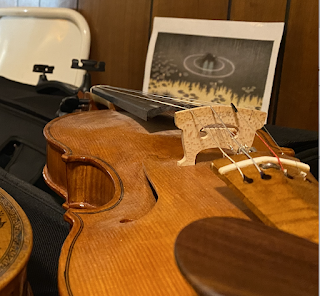 Rather solid and clunky.

And here's the after. 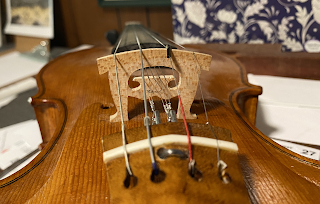 A bit more interesting.  I can't tell yet that it makes much difference, though I think I am getting a bit more sustain in my understring ring.  I also think these sort of changes can take a little time to settle in.  Or maybe me getting used to playing what is, in part, a new instrument.  They do talk back to you.

It's a work in progress.  As is my learning of Hardanger fiddle tunes.